My name is Arshad Mansoori from Khargone, Madhya Pradesh. My niece Alisa Mansoori, 9 months old had a hole in her heart. She was suffering from shortness of breath and bluish color to her lips and skin. We consulted the doctor at Khargone and he referred her to Vadodara, Gujarat where Pediatric Interventional Cardiologist diagnosed her with a Ventricular septal defect associated with severe pulmonary arterial hypertension, a rare heart defect that's present at birth (congenital).

A cardiologist at Vadodara referred her to Bhanubhai Madhuben Cardiac Centre of Shree Krishna Hospital, Karamsad, Gujarat for further treatment. Dr. Vishal Bhende. Pediatric Cardiothoracic Surgeon performed the surgery for the repair of the Truncus Arteriosus with a handmade pulmonary trileaflet valve conduit from the Right Ventricle to the Pulmonary Artery and did the Ventricular Septal Defect Closure. After the surgery, she was kept in ICU under the observation of a pediatric intensivist. and discharged from the hospital with milestone recovery.

Alisa`s father is working on a farm as a daily wager and could not able to afford the high cost of the treatment. The surgery was conducted under the Ayushman Bharat Yojana. 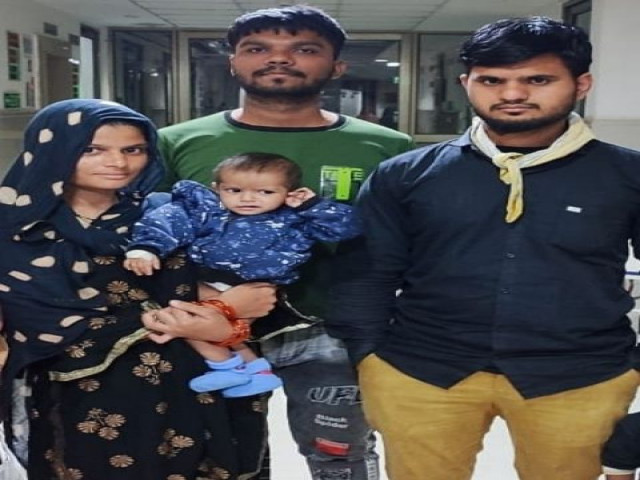 My name is Shankar. I am an autorickshaw driver; have two kids – the elder one NIKHIL is 5 years old and the younger one 3 yr. old VISHAL. My family – wife, two kids, and parents, live in an interior village in Mehmedabad, which is about 30 km. from Ahmedabad. We lead a simple hand-to-mouth life with my meager income. We were happy till my elder son Nikhil complained of persistent stomach aches.

Initially, we did not take his complaints seriously. But when his nagging pain persisted and lasted for long period we took him to a nearby village hospital for consultation. The doctors there were unable to pinpoint the problem and referred us to the Shree Krishna Hospital in Karamsad, which is about 60 km. from our village.

At this hospital, the doctors, after thorough study and investigations told me that Nikhil was having a `Blood-Cancer'. I was crestfallen and could not believe what I heard from the doctors. For a moment I thought the life in me has come to an end.

The doctors counseled me on the line of treatment that Nikhil must take. I did not know what to do. But, I took courage and revealed the sad news to my wife. I had no courage to look at her shocked face and at the same time the agony of my child.

We borrowed some money from my friends and relatives for Nikhil's treatment at the hospital. He was put on chemotherapy. While I stayed with him during the night, I went out during the day to arrange funds for his treatment. Since we were left with no more sources, I decided to talk to Nikhil's Doctor about our financial condition. The doctors took up the matter with the management who decided that Nikhil's treatment be continued and will not be stopped for want of money. God was great, and the treatment continued.

Nevertheless, we were unable to bear his cries and agonizing face during the course of his treatment. But after a few days of the treatment, he showed tremendous improvement and started smiling and becoming playful. Our worries and stress got some relief. His smile gave us courage and hope!!

Nikhil has since completed his one and half year's treatment successfully, which according to the doctors is the first phase of treatment, I have heard about miracles happening…but in Nikhil's case, we have experienced it!. This would not have happened but for the greatness of God. Equally great were the doctors and the ever-supporting staff at the Shree Krishna Hospital. We cannot ever forget their counseling, support, and cooperation from time to time. My whole family is indebted to all the donors, and institutions for their financial support which brought a smile to Nikhil's face and hope to all of us in my family. 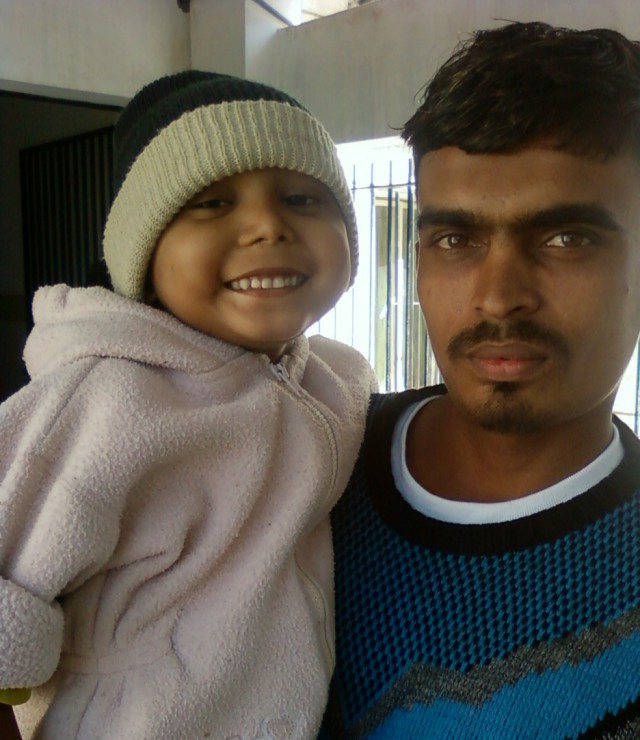 My problem started five months back. I was feeling sick and had a white discharge. I got alarmed when the frequency of the discharge increased. I lost my appetite and felt uneasiness now and then. When the problems persisted and rather increased I decided to visit the Primary Health Center in my village. The doctor there conducted a few investigations and presumably suspected it to be cancer. He, therefore, referred me to a higher centre in Ahmedabad which is about 150 km. from my village.

However, having heard of the Shree Krishna Hospital at Karamsad from our friends we decided to go over there. After detailed investigations, the doctors confirmed that I have `cancer of the cervix. We were shocked and rather terrified.

The doctors clearly mentioned the disease, the line of treatment, and the approximate cost involved for the treatment. Left with no alternative vis-à-vis our poor economic conditions we approached the hospital authorities for help.

Our request was favorably considered by them the treatment started. During my treatment, I have had a lot of physical problems. My family members too faced a lot of mental stress and trauma. We did not however lose courage and faced the situation. This helped me complete the treatment successfully. I am now fine and lead a normal life, cooking food, etc., and attending to all the household work as before. I do not have any stress and strain now.

Though I faced many difficulties and physical inconveniences during my treatment I never gave up. I and my family are grateful to Shree Krishna Hospital and the institutions that have provided financial support which really saved my life. 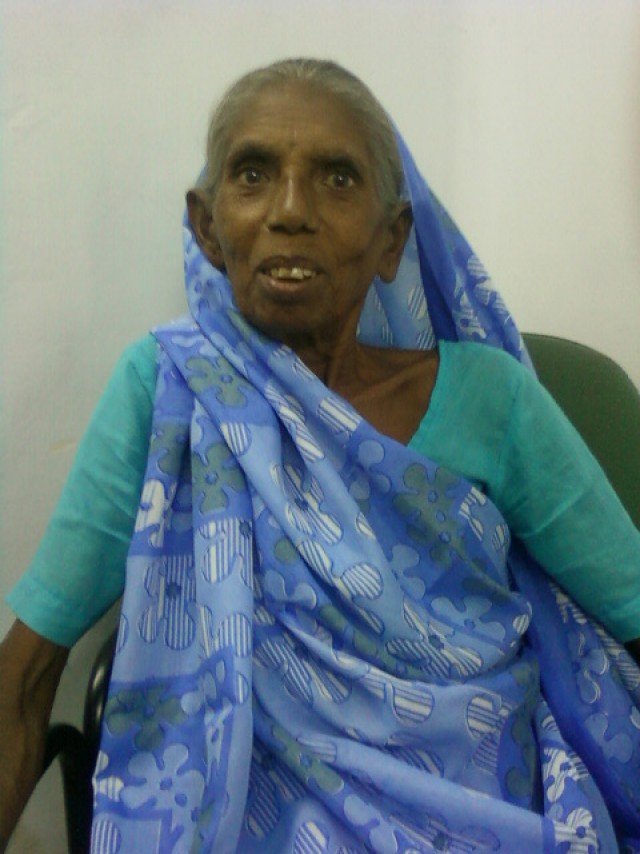 I am Manjulaben Parmar. I am 35 years old. My husband is a daily wager. We have a 10-year-old child, studying in 5th standard. A few months back I felt a lump in my left breast. I applied some balm and continued applying it for a couple of months. It gave me no relief and the size of the lump increased. Therefore I consulted a local doctor who suggested a detailed check-up at a bigger hospital. We then decided to go to the Shree Krishna Hospital. The doctor at this hospital examined me in detail. I was diagnosed to have 1breast cancer'. The doctor informed us in detail about the disease, the course of treatment, and the likely cost of treatment.

The first thought that bothered me was as to about would happen to my 10 years school-going child if something happened to me during the course of my cancer treatment! But, I reconciled to the fact and decided to undergo surgical treatment for the sake of my son.

I was tense before the surgery but had full faith in God and prayed that he should save me for my son. The operation was successful and the line of treatment continued. I was discharged from the hospital and was back at home. I hugged and hugged my son. I realized how precious one's life is!!

I knew that I had won only half the battle by undergoing the surgery, and I have to undergo chemotherapy and radiation therapy which would only help me come out of the problem. But I was not prepared or motivated enough to face this phase of treatment. I was however counseled by the hospital staff. I was convinced and completed the course of treatment. I forgot all my physical inconveniences whenever I thought of my son's little face.

I still remember my neighbors' commenting upon my disease as "you won't survive long; some mentioning 'cancer is not curable' – few suggesting that I go for 'Black Magic'. But I proved them wrong by undergoing the medical treatment as advised by the doctors at the Shree Krishna Hospital. I am now a healthy patient and disease free. The disease has not only changed my life but I am a living example to others in my village that ` cancer is curable and we should have a bit of course to face it

I am really thankful to all at the Shree Krishna Hospital – the doctors, supporting staff, and above all the donors without whose financial support my treatment would not have been possible. God is great... 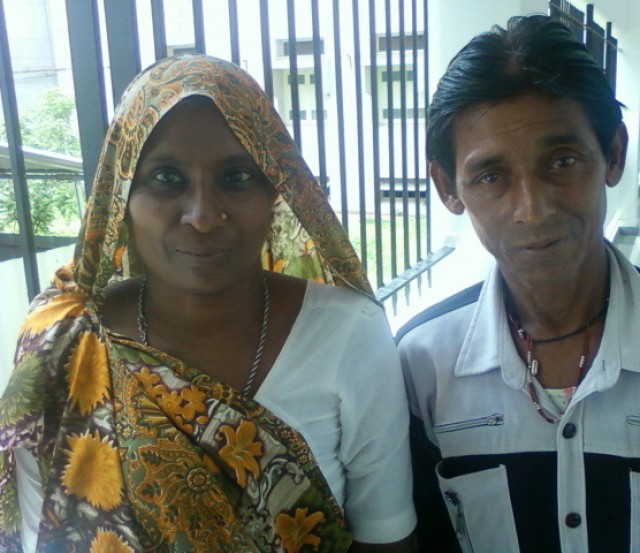 For many years I had felt some lump on the right side of my neck which I never took seriously. But, when the size of the lump started growing we thought of going for a medical checkup at the Shree Krishna Hospital at Karamsad. After detailed investigations, the doctors discovered and told my parents that I was having `Hodgkin's Lymphoma. I and my parents was shocked. I thought the end of my life is close. At the same time, my parents were naturally worried about my disease and the cost of treatment. They were shattered, thinking they won't be able to manage the cost of treatment. However, they finally decided that I should continue with the line of treatment, till they can manage funds on their own. They did manage some funds and the treatment started. Meanwhile, my parents talked to the concerned authorities at the hospital about their financial crisis. The authorities took up our case sympathetically and extended relief in the cost of treatment.

It was only six months of my married life when I was diagnosed of having cancer. My parents were not very sure of how my in-laws would react to such a situation. However, to our great surprise and relief, they appeared to have a balanced view and accepted the situation that we are in. But our happiness did not last long as my in-laws and husband showed signs of wearing in and not being supportive during the entire course of treatment. Their problem was my regular visits to the hospital because of which I was not able to do the household work.

My father accompanied me to the hospital during my chemotherapy and radiotherapy sessions. During treatment, I developed mouth ulcers which were painful. I was not even able to swallow food and was forced to starve for days together. But my hope, and patience coupled with the support and prayers of my parents somehow completed my treatment - which was indeed a painful phase in my life.

Now I am fit and healthy and living a normal life like any other, and I am now a proud mother of a month-old baby!!

I am thankful to the Almighty who gave me the course to fight against this dreaded disease. I am indebted to Shree Krishna Hospital and the institutions who supported me financially with the treatment giving me a new life tome. 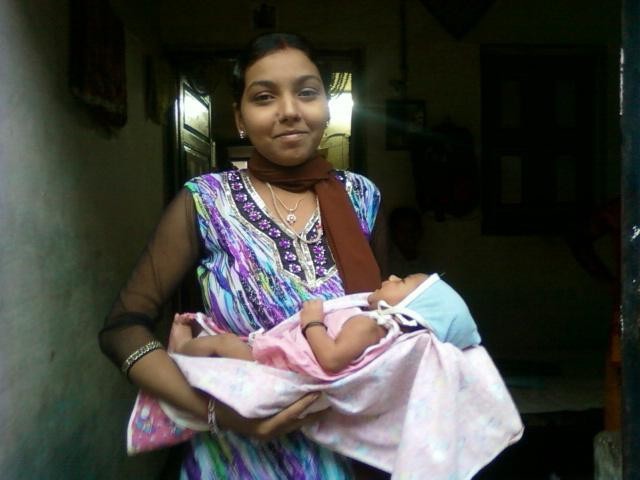